The chapter on Peru by Martinelli and Vega provides a comprehensive and fascinating overview of Peru’s monetary and fiscal transition from high inflation to stabilization and then to several decades of low inflation and economic growth. In this discussion, I present a framework that links the political progress discussed in the chapter with positive economic outcomes. In particular, the simple model provides an explanation for why political reform, debt reduction, enhanced credibility, and growth are inextricably linked. I conclude by placing Peru’s experience in context with other emerging markets.

Figure 1 replicates the authors’ figure 1 and depicts Peru’s GDP growth over the last half century. Peru’s post-1990 growth experience is striking. Figure 2 replicates the authors’ figure 3, which documents the fiscal consolidation that took place in the 1990s and 2000s. Associated with this consolidation is a dramatic decline in debt, particularly external debt, as a fraction of GDP. This is depicted in figure 3, which is the same as the authors’ figure 8. At the same time as the fiscal and monetary stabilization, Peru began reforming its private sector, including a major privatization program. One result of this combination of policies was a sharp increase in inward foreign direct investment as a percentage of GDP, depicted in figure 4.

This discussion provides a framework in which to understand why this prudent fiscal policy led not only to monetary stability but also to a period of sustained growth and investment. To do so, I build on Aguiar and Amador (2011).

Consider a deterministic, discrete time environment in which a small open economy (SOE) operates a neoclassical production function. Specifically, output is f(k) when k is the stock of capital, all expressed in per capita terms, with

, The SOE’s government has enough policy tools to choose per capita consumption c and the level of capital k each period. To simplify the exposition, suppose the capital is rented from a world market each period at a rate r + δ, where r is the world risk-free interest rate and δ is the rate of capital depreciation. See the Peru chapter for a more general framework in which capital is accumulated via investment. The important element is that capital is mobile between periods but is vulnerable to expropriation within a period.

The government finances consumption and capital expenditures through current output and net borrowing and lending with foreign debt markets. In particular, external debt bt evolves according to the law of motion:

where R = 1 + r. Summing this equation forward from initial debt b0 and imposing a no-Ponzi condition, we obtain a present value “resource constraint”:

Any allocation {ct, kt} that satisfies (RC) is feasible for the government to implement.

The representative domestic agent has preferences over consumption sequences, given by

is the discount factor and u(c) is a strictly increasing function. For simplicity, we shall assume

, although this rules out some interesting debt dynamics that are discussed in Aguiar and Amador (2011).

while in power, where u(c) denotes the utility of the domestic representative agent. The incumbency bias is represented by

. Assume there are N political parties, and with probability

is in power. Transitions are independent and identically distributed, and hence there is a constant hazard γ that party n will be in power next period regardless of current incumbency. Aguiar and Amador (2011) implement a more general formulation in which incumbency affects the probability of being in power next period.

Given a sequence of consumptions {ct}, the incumbent at period t has value

where the term in square brackets in the continuation value captures the uncertainty regarding future incumbency. As this value is a constant, we can express the current incumbent’s value in normalized form:

is a parameter that summarizes the preference for incumbency combined with the probability of losing office. Note that aside from the risk of political transitions, the current incumbent shares the same discount factor as private agents, β. This construction results in political preferences that have a hyperbolic (or quasi-geometric) discount factor in the spirit of Laibson (1994). An increase in

or an increase in turnover

In addition to the political economy friction, the other inefficiency in the environment is due to limited commitment. In particular, the government cannot commit to repaying debt and respecting capital property rights. The incumbent at time t always has the option of deviating from an allocation to increase current consumption. The consequence is a lower continuation value as foreigners are no longer willing to trade financial assets or physical capital once the government has deviated. Aguiar and Amador (2011) specify microfoundations for the punishment. For this discussion, it suffices to posit a deviation value

The environment builds on the neoclassical growth model, and hence capital is a focal variable that is subject to expropriation. That is, private investors are concerned about capital taxation or expropriation. It is not conceptually difficult to extend this environment to inflation and money balances. The mechanism described below that links debt reduction with enhanced credibility can therefore easily encompass Peru’s inflation stabilization as well.

We now characterize constrained efficient allocations in this environment. Specifically, consider allocations that maximize the representative domestic agent’s initial welfare subject to the resource constraint and a sequence of constraints that ensure each incumbent does not deviate: 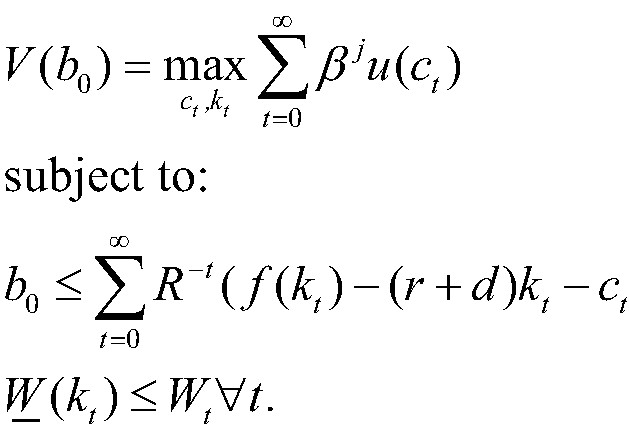 be the multiplier on the resource constraint and

be the multiplier on the sequence of political participation constraints. The first-order condition for kt is

The numerator on the right-hand side is the wedge between the marginal product of capital and the rental rate. The denominator is a strictly positive number. Hence, capital is distorted down if

. That is, if the political participation constraint strictly binds, capital is depressed. This implies that lack of commitment to debt repayments and property rights puts downward pressure on the level of economic activity.

The first-order condition for ct is

The first term in the brackets on the right is the role the resource constraint plays in determining the level of consumption: more initial debt implies a greater μ0 and a lower ct, all else constant. The second term sums the multipliers λs over s ≤ t. This sum is weakly positive and hence raises ct, all else constant. This reflects that ct enters the value for all previous political incumbents, and hence raising ct relaxes the political participation constraint for all prior governments. This is the usual “back-loading” incentive in models of limited commitment. The final term reflects that consumption in period t is of particular value to the incumbent in that period due to the political friction θ > 1.

An interesting implication of (3) is that

. If this were not the case, then

would diverge, violating the first-order condition. Hence, the economy eventually saves its way out of the constraints. From (2), this implies that

, and capital achieves its first-best level.

The fact that the steady state is the efficient level of production stems from the strong incentives to delay consumption in models of limited commitment when βR = 1. However, the speed at which kt converges to the efficient level depends on θt. To see this, suppose u is linear:

. The first-order condition (3) then traces out the following first-order difference equation:

The greater the political economy wedge

, the slower the rate of convergence to the first-best level of output. Hence, more distorted political economy environments have slower growth.

To bring the model back to the discussion of fiscal and monetary stabilization, under some concavity assumptions on W, equation (2) implies that as

, capital is increasing to its first-best level. This implies that the political deviation value

is increasing over time. One can show that to ensure participation, this requires that consumption is growing and debt is declining. That is, as debt declines over time, both capital and consumption increase.

Credibility in this environment is earned by the reduction of debt, and the payoff is greater growth. This mimics the experience of Peru depicted in the figures above.1 A theme throughout this volume is the role that credibility of fiscal prudence plays in inflation stabilization. The same credibility plays a role in encouraging greater private-sector economic activity.

Peru’s growth experience via debt reduction is not unique. Gourinchas and Jeanne (2013) document that high-growth emerging markets tend to run current account surpluses; that is, growth is associated with net capital outflows. Aguiar and Amador (2011) dig deeper and document that this pattern is driven by the public sector reducing external indebtedness (or increasing foreign reserves or both), combined with private-sector capital inflows. Figure 5 depicts the pattern for forty-five developing economies. On the horizontal axis is the change in public-sector net foreign assets (NFA) between 1970 and 2011 normalized by average US dollar-denominated GDP, where Public NFA is defined as foreign reserves minus public external debt expressed in dollars. On the vertical axis is annual average growth in real GDP over the same period. The positive slope indicates that countries that grow relatively fast also have increases in net foreign assets. That is, countries grow by reducing their net indebtedness.

The three large dots in figure 5 depict Peru’s experience. The dot labeled “Peru” is the data point for Peru over the entire sample. The two dots labeled “Peru 70–90” and “Peru 90–11” represent the subperiods 1970–1990 and 1990–2011, respectively. The robust growth that Peru has experienced since 1990 coincides with a significant reduction in external debt. Viewed through the lens of the model above, the political stabilization post-1990 led to a coincident decline in debt overhang and faster growth. The chapter by Martinelli and Vega documents that the same forces led to inflation stabilization. While the political frictions in the model are taken as a primitive, the exercise highlights that Peru’s improved political economy environment is consistent with the host of good economic outcomes discussed briefly above and in great detail in the fascinating analysis of Martinelli and Vega.

Alesina, Alberto and Guido Tabellini. 1990. “A Positive Theory of Fiscal Deficits and Government Debt in a Democracy.” Review of Economic Studies 57 (3):403–414.

Persson, Torsten and Lars E. O. Svensson. 1989. “Why a Stubborn Conservative Would Run a Deficit: Policy with Time-Inconsistent Preferences.” Quarterly Journal of Economics 104 (2):325–345.